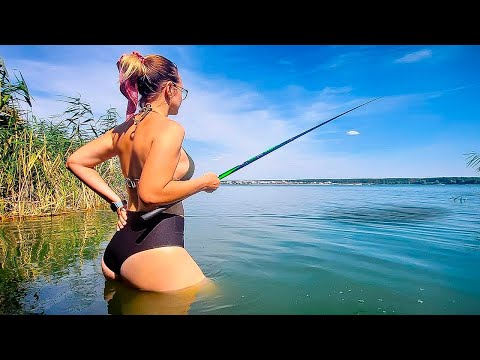 We pulled up to the current honey hole and my partner landed a bass over 7 pounds within the first ten casts. We thought we were onto something special. We managed to get some small keepers early after the nice 7-pounder (my buddy’s personal best). The mist turned to rain as the day went on.

The noise of the cars exhaust was so loud we did the obvious, turn the radio louder. Between the radio blaring, the exhaust rumbling, and yelling to talk to each other we thought we were doing fine. Halfway to the river we approached a group of men standing by the road. As we sailed by them we noticed that they stared us down. We pulled over and realized why they were staring, one of our trailer tires had blown and all that was left was the rim. I can just imagine the sparks we must have been given off.

Do you really think I would sit there and mind my own business? I’m really not cut out for that kind of mindset you know. A young guy from Texas moves to California and goes to a big department store looking for a job.

The fisherman is worried, but he wants to catch the world record trout, so he decides to have just a few more casts. The other man looked at him and sadly said the most shocking thing the experienced man had ever heard. The inexperienced man tells him, “I do not have a big frying pan, so I won’t be able to cook the big fish for dinner even if I take them back! ” The experienced fisherman realized that the other one was nothing less of a foolish man, who did not even think of cutting up the fish and then cooking it.

We are sitting there talking and he pops up along the other shore and is walking all along the shore in wet snow to try and find a spot to get on the ice . Anyways he ends up talking to us from shore and just asks to hold up are licenses and then leaves lol all that trouble just to see if we had are licenses dintin even check them lol . I bet he was and ice cube by the time he got back to his truck . After he left we couldn’t help form laughing about it . For what seemed like an eternity these fish play games with us.

Funny story. Years ago I had just met my father in law. My wife called him dad, his wife and brother called him Dilbert. I didn't know so I proceeded to call him Dilbert the whole weekend before he corrected me. Quite the awkward fishing trip. Lol.
Hubert was his name.

A guest that I’ve fished before gets in my boat (hadn’t learned the first time?)- I know he fishes a lot everywhere and has a bit of a “go big or go home” mentality. This was “mid to late” July and I knew that a small bump of large fish should be showing up at a particularly favorite spot any day. They are all in for big fish, have to show up the other guys, and so we decide to wait it out. So after putting on his hat – for it was a hot, sunny afternoon – Mr. Jumble set of to the pier.

It seemed that an acorn and a maple seed had fallen into the sore on the mule’s back, taken root, and grown. So, being a resourceful man, the farmer cut down the oak tree and whittled a beautiful saddle from the stump. To this day, the farmer can often be seen riding through his fields on the old mule. He left the maple tree standing, because he liked to ride in the shade. One week later, we watched a guy chase his bucket all the way across the bay. Every time he would get close to the bucket the wind would catch the open end and it would speed away.